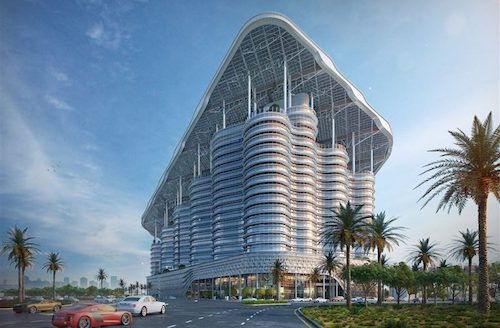 Al Shera’a will be the “tallest, largest, and smartest” government zero energy building in the world, according to DEWA

Dubai Water and Electricity Authority (DEWA) has awarded a construction contract worth over Dhs981m for its new headquarters to a consortium comprising Ghantoot Transport and General Contracting and Ghantoot Gulf Contracting.

Construction of the structure, called Al-Shera’a (Arabic for sail), is expected to be complete within 30 months, a statement said.

DEWA previously awarded the first phase of construction, worth Dhs46m, to Dutco Balfour Beatty, which brings the total cost of the building’s construction to over Dhs1bn.

Al Shera’a will be built in Jadaf in Dubai, and will be the “tallest, largest, and smartest” government zero energy building in the world.

With a built-up area of over 2 million square feet, the building will have 15 floors, a basement and four floors of car parking.

The building can house more than 5,000 people.

Facilities will include a 500-people auditorium, training halls, a creativity centre, an exhibition hall, a nursery for the children of female employees, and a gym. It will also feature an open courtyard, which will have sustainable gardens and will be directly linked to Jadaf metro station by a bridge.

The building will have over 20,000 square metres of photovoltaic solar panels rated to over 4,000 kilowatts. It will generate over 6,500 megawatt hours (MW/h) a year of renewable energy.

Total energy used in the building during a year will be equal to or less than the energy produced on site during that year and it is intended to use 50 per cent less water than regular buildings.

DEWA will later announce two more phases to implement work on Internet of Things (IoT), Artificial Intelligence (AI), and the photovoltaic solar systems for the building, a statement said.

“By building Al-Shera’a, we establish a global benchmark for buildings that achieve a balance between development and the environment,” said Saeed Mohammed Al Tayer, MD and CEO of DEWA.