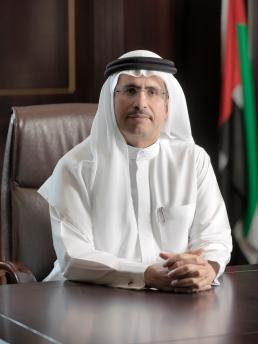 HE Saeed Mohammed Al Tayer, MD and CEO of DEWA

Dubai - HE Saeed Mohammed Al Tayer, MD and CEO of Dubai Electricity and Water Authority ( DEWA ), said that DEWA is working in line with the vision of His Highness Sheikh Mohammed bin Rashid Al Maktoum, Vice President and Prime Minister of the UAE and Ruler of Dubai, to host the best World Expo that the world has ever seen in Dubai. DEWA will contribute to achieving the promise of His Highness by building world-class energy infrastructure that meets Dubai's development demands. HE Al Tayer stated that DEWA has launched a wide variety of initiatives in this regard, allocating more than AED 2.6 billion to boost water, electricity and renewable energy projects according to the highest international standards.

DEWA 's major goal is to contribute to organising the Dubai Expo 2020 as per the vision of the leadership as well as demonstrate DEWA 's leadership in the public utilities sector by adopting renewable energy sources that support the 'Green Economy for Sustainable Development' initiative, as well as Dubai Expo's theme of 'Connecting Minds, Creating the Future' and its three sub themes of sustainability, mobility and opportunity.

Al Tayer said that Dubai's energy investment will be AED 56 billion over the next five years, in an effort to meet the Emirate's increasing demand for water and electricity as well as to promote the growth of green economy, set new international standards and create a competitive edge for the UAE in clean energy technology and energy efficiency.

"DEWA is implementing the Mohammed bin Rashid Al Maktoum Solar Park project, one of the largest strategic Independent Power Producer (IPP) projects worldwide in renewable energy with anticipated 1,000 MW production capacity by 2019 and 3,000 MW by 2030. Allocating 100 MW to power Expo 2020 Dubai, the pioneering Solar Park also endorses Dubai Plan 2021 that seeks to consolidate Dubai's position as a smart, integrated and connected city with cutting-edge infrastructure that supports the Emirate's phenomenal social and economic development. Furthermore, the project reflects DEWA 's unwavering commitment to sustainability, a fundamental pillar of Expo 2020. The Mohammed bin Rashid Al Maktoum Solar Park also supports the Dubai Integrated Energy Strategy 2030, developed by the Dubai Supreme Council of Energy to diversify Dubai's energy mix. Solar energy will account for 7% of the total energy production by 2020 and 15% by 2030. Occupying 4.5 square km, the Park will help in reducing carbon emissions by approximately 400,000 tonnes by 2020, which is a substantial contribution to the green initiatives and programmes implemented by the Government of Dubai to reduce carbon emissions," said Al Tayer.

"The Hassyan Clean Coal Power Plant is another pioneering project implemented by DEWA based on the IPP model. With a production capacity 1200 MW, the first phase will be operational by 2020. DEWA has awarded the German company Siemens a contract for the expansion works of its M Station, the largest power generation and water desalination plant in the UAE. The project adds new power generation units to produce 700 MW of electricity, raising the total production capacity to 2760 MW upon completion of the project in 2018. The M Station will be a significant boost to DEWA 's current installed capacity of 9,656 MW of electricity and 470 million imperial gallons per day (MIGD) of desalinated water to meet Dubai's demand. Several other projects are being implemented such as allocating part of the capacity of a 400/132 substation, building three 132/11 kV substations with high voltage (132 kV) cables reaching 45 km in length, and building power distribution networks with medium and low voltage cables and additional transmission stations. The total cost of the electricity overall projects will be AED 2.180 billion. DEWA will also roll out water transmission networks with pipelines that are 600 and 1200 mm in diameter, pumping stations and distribution stations. Expected to cost AED 515 million, these projects will increase water flow rates and ensure adequate water supply that meets the increasing demand," added Al Tayer.

The 'Smart Applications via Smart Grids & Metres' initiative will enable DEWA to build an integrated smart grid for Dubai Expo 2020. Covering generation, transmission and distribution systems. The AED 7 billion smart grid will include demand side management, asset management, automation, transfer stations, automation of distribution networks and the integration of systems and smart meters. All these initiatives will undoubtedly contribute to achieving the 'Smart Dubai' initiative.

Al Tayer also highlighted DEWA 's preeminent international position as an exemplary utility company underlining its ability to provide excellent services to host Dubai Expo 2020. DEWA is establishing the required infrastructure to provide electricity and water to more than 25 million expected visitors as well as the needs of the the mega infrastructure projects being executed in preparation for hosting the major international event.

"DEWA has achieved highly competitive results that surpass those of leading European and American utility companies in terms of efficiency and reliability. This is demonstrated by our reduction of losses in the electricity transmission and distribution networks to just 3.26%, compared to 6-7% in Europe and the US. Network line losses in the water sector decreased to 9.1% compared to 15% in North America, setting another international benchmark, and highlighting our commitment to meet the growth in demand for water and promoting sustainability," said Al Tayer.

"DEWA 's achievements contributed to the UAE ranking fourth worldwide and first in the Middle East and North Africa in 2014 and 2015 in ease of access to electricity according to the Doing Business Report issued by the World Bank. DEWA will persist in its quest for success through the comprehensive development of its operations to achieve excellence by adopting global best practices. DEWA is a leading, world-class utility service provider that has several drivers to make it an active contributor to organising the best edition of the World Expo in Dubai," concluded Al Tayer.