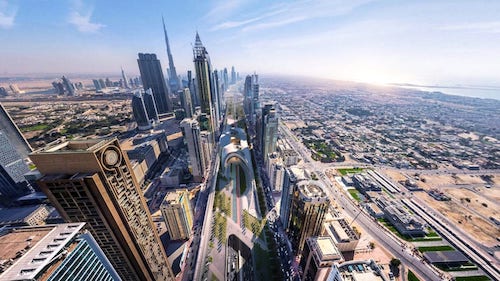 Sheikh Zayed Road is Dubai's main artery, a 14-lane superhighway that runs the length of the city.

This is by far the busiest road in Dubai, the site of frequent, epic traffic jams that are infamous among commuters.

But an ambitious new proposal would see a stretch of Sheikh Zayed Road transformed into an "urban living room" with fumes and congestion giving way to a green, pedestrianized oasis.
The project, titled "X-Space," from architects Mouaz Abouzaid and Dima Faraj recently took the World Architecture Festival's (WAF) top prize in the Smart Cities category, which honors "the world's most forward-looking architectural concepts."

Reclaiming space
Architect Abouzaid says the proposal was inspired by seeing sand dunes encroaching on Dubai streets "as if nature was taking action...sending a message to architects."
Abouzaid and Faraj's plan entails one kilometer of highway becoming a space for clean air, social life, and leisure.

"X-Space" would exist on two planes; a ground level consisting of gardens, trees, and open space, and an upper level with leisure facilities such as cafes and gyms.
The area would be designed for the use of cyclists and pedestrians rather than cars, which would pass through a tunnel beneath the garden level.
The WAF described these plans as a "compelling vision for the regeneration of downtown Dubai (that) prioritizes pedestrians and cyclists over vehicles."
The site of the proposed development currently allocates the vast majority of space to cars with just a fraction for pedestrians, Abouzaid estimates. He plans to reverse that ratio.

Beyond the imperative to reduce pollution, the architects are also keen to create more social habitats.
"Sheikh Zayed Road splits the city in two and we want to stitch it together with green spaces and bring life back," says Abouzaid. "We need to create space for people to share."
The future of urban design is "human-scale," the architect believes. The towering buildings around Sheikh Zayed Road require occupants to "go down 70 floors to meet other people," says Abouzaid. "We wanted to slow life down a little and create space for social events."

Abouzaid acknowledges there are challenges with realizing the project, such as finding a way to re-route affected traffic - not all of which could pass through the proposed tunnel.

But he is upbeat about the prospects of delivering "X-Space," buoyed by the WAF's award and "good feedback" from government officials.
The architect points to initiatives in Spain and South Korea turning traffic-clogged roads into vibrant social spaces as role models, suggesting this practice "will spread everywhere sooner or later - we want to have our solution ready."
Such plans may benefit from the Government of Dubai pursuing an ambitious sustainability drive, including a target for 75% clean energy use by 2050, backed by massive infrastructure development, and a move towards clean and public transport rather than private cars.

"X-Space" may seem radical today, but human-scale, sustainable development could shape the future.