Revealed: how ready is Dubai for new digital era 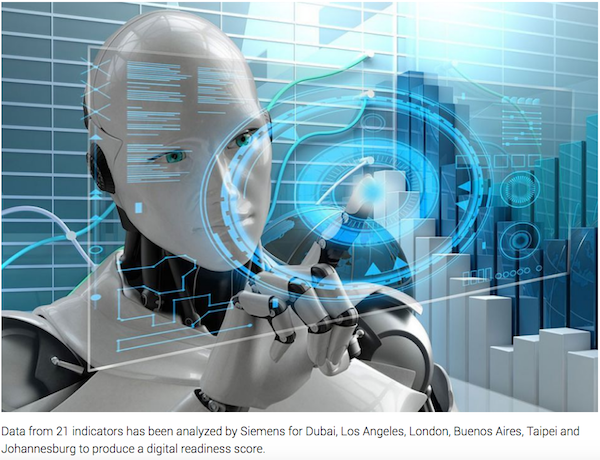 Dubai is making excellent progress in its drive to become a smart city which embraces digitalisation and develops new ways of living, working and interacting, according to Siemens.

Its Atlas of Digitalisation report is based around the interconnected themes of Expo 2020 Dubai – mobility, sustainability and opportunity – and assesses how the fourth industrial revolution has already impacted urban life around the world, and the potential it could have in the future.

Data from 21 indicators has been analyzed by Siemens together with Signal Noise, part of the Economist Group, in Dubai, Los Angeles, London, Buenos Aires, Taipei and Johannesburg to produce a digital readiness score.

Dubai gained scores of six out of 10 for both readiness and potential. This compared to London which scored eight for readiness but only three for potential while Los Angeles scored seven and three respectively, Taipei scored six and three, Buenos Aires scored four and four and Johannesburg scored two and six.

The analysis recognises Dubai’s advanced implementation of digital technologies in areas such as smart metering, online connectivity, mobility and smart government, and initiatives such as Smart Dubai which are supporting its ambition to be the happiest city on Earth.

It also identifies potential for digitalisation to positively impact areas such as renewable energy, which Dubai is already addressing via its clean energy strategy.

The analysis considers areas such as smart electricity and transport systems, internet connections and digital governance services. The score reveals the current level of maturity of each city’s digital infrastructure, and its preparedness for a connected future.

“Each city must address its own unique mix of challenges and opportunities by embracing digitalization; the key to sustainable, livable future cities,” said Dietmar Siersdorfer, CEO, Siemens Middle East and UAE.

“The Atlas of Digitalization gives us an all-important understanding of the current status of digitalization in cities around the world, and the data tells us Dubai has already made excellent progress in key areas. Dubai is on a successful path thanks to strong ambition and visionary leadership, and we hope the Atlas will inspire new ways of thinking to shape the smart cities of tomorrow, and realize the global potential of City 4.0.”

The analysis also takes into account areas such as innovation, greenhouse gas emissions and time spent in traffic to give the cities a Digital Potential Score, indicating where there is opportunity to grow digital capabilities to transform society and economy.

While each city is unique, they all share one characteristic - their ingenuity in using digital technologies to make infrastructure more efficient and productive, and to address challenges such as air pollution, congestion, population growth and natural hazards, Siemens said.