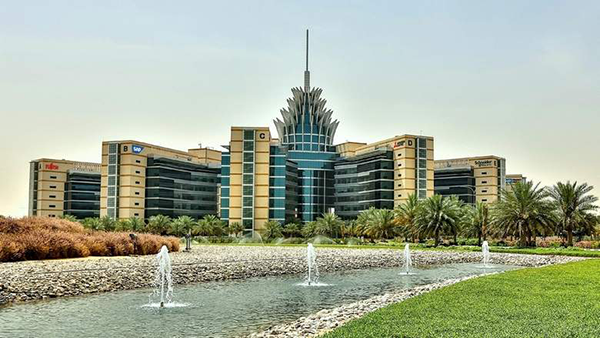 Dubai Silicon Oasis Authority will invest Dh210 million on smart services as well as for the construction of the light industrial units in the free zone.

Spread over 18,000 sqm, the fifth phase was completed in January 2017 with total investment in the project reaching approximately Dh223 million. The sixth and final phase of the project, set for completion in Q1 2019, has been launched at a total cost of Dh110 million.

DSOA has commenced accepting leasing requests for office space and lifestyle facilities at Silicon Park, it said in a statement on Saturday.

In H1 2017, DSOA registered a 23 per cent increase in the number of rented spaces in its Data Center while reporting hikes in service fee profits at 28 per cent and community services profits at 18 per cent compared to the first six months of 2016.

In February 2017, Sheikh Ahmed unveiled the commemorative plaque and laid the foundation stone of Silicon Park at DSO - the first project in Dubai to fully implement the smart city concept, spanning 150,000-square meters and set for construction at a cost of Dh1.3 billion.

He noted that DSOA has allocated Dh100 million to provide an advanced technological infrastructure at Silicon Park and to implement smart services in line with Dubai's smart city initiatives.

He said: "In line with the UAE Vision 2021, the project achieves several of the key performance indicators of the UAE National Agenda, including cohesive community, safe society, and sustainable environment, and aligns with the latest global trends for smart cities. Silicon Park has already garnered much interest from international companies keen to participate in the UAE's march to sustainability. Once complete, it will provide a superior standard of living for residents, professionals, and visitors."

As a smart community, Silicon Park will feature intelligent solutions from charging docks for smart devices on the streets to smart pop-up furniture and digital play tables, as well as optimally designed bus shelters, piazza shading, and other public amenities.

Furthermore, its residential units will boast remote-controlled systems that can regulate lighting, air conditioning, and electrical appliances in addition to controlling the movement of windows and curtains. Upon completion, the project will offer a range of office spaces and business facilities including meeting rooms and a multi-purpose conference center.

The project will optimize the use of renewable energy resources and adopt measures to achieve efficiency in energy consumption. In line with this objective, it will feature smart lighting systems with motion sensor controls that respond to traffic and pedestrians.

Silicon Park will also include a control center that collects and analyses data gathered through sensor devices. The collated information will enable seamless management of smart devices to ensure the delivery of best-in-class smart services to employees, residents, and visitors.

Completely free of regular vehicles, Silicon Park will use electricity-powered alternatives as the primary mode of transportation. All residents and visitors owning electric vehicles will be able to access the charging stations set up across the premises. In addition, they will have the option to use smart rechargeable electric bikes as a means of conveyance.

The Roads and Transport Authority (RTA) and Dubai Silicon Oasis Authority (DSOA) joined forces in a ground-breaking strategic partnership to plot out specific routes for the movement of RTA's smart vehicles at DSO. The initiative reinforces the shared commitment of the two government entities towards enhancing the smart mobility concept in Dubai.

In a bid to encourage the public to use zero-emission electric cars, DSOA announced a new initiative enabling electric vehicle owners to use the charging stations on its premises free of charge from 22 March 2017 until the end of the year.

In addition, its Dubai Smart City Accelerator programme has received 800 applications since its launch in May 2016.

As part of DSO's continued efforts to build an integrated city that meets the needs of employees, residents, and visitors within the high-tech park, DSOA, alongside investors, is developing more than 46 projects across 1.1 million square meters. Additionally, 10 developments have been completed in the first half of 2017, which amount to a total area of 280,000-square meters.

DSOA said nearly 40 per cent of the construction work at Dr Solaiman Fakih Hospital and Medical University, is now complete. The 150,000-square meter university hospital is being constructed in two phases at a cost of Dh1 billion, and is scheduled for completion in 2019.

Backed by the parent hospital's over three decades of experience in healthcare and hospital management, the new branch of Dr Solaiman Fakih Hospital and Medical University at DSO will offer 4,000 jobs at its 300-bed educational hospital.