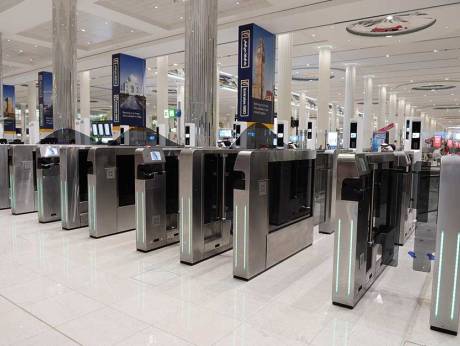 With the increase in the numbers of people using Dubai Airports every year, the General Directorate of Residency and Foreigners Affairs (GDRFA) in Dubai, came up with the next generation of smart gates which will be installed in all the gates in Terminal 1,2 and 3 and Maktoum airport.

“The new generation of the smart gates will replace all the current gates by [the] first quarter of 2018. By September, we will have 25 smart gates at departure in Terminal 3. It is the future at work for the first time in the world. Passengers will cross the gates smoothly within a short time without the need to stand in queues to get the passport stamped,” Brigadier Talal Ahmad Al Shanqiti, general director assistant of the Airport Passport Sector in GDRFA-Dubai, told Gulf News.

For the moment, about 20 per cent of travellers use the smart gates in Dubai and the GDRFA aims to increase that to 50 per cent in the near future.

The biometric tunnels that scan people’s faces as they walk to baggage reclaim will be in white colour and will light up when a passenger goes through the tunnel.

The ‘biometric border’ walkway takes a 3D scan of people’s faces as they enter the airport and checks it against a digital passport using face-recognition software.

The digital passport, created for the system, contains information from the electronic chip in physical passports, as well as additional details including fingerprints, iris scans and face-recognition data.

In Sharjah, meanwhile, more than 850,000 passengers passed through the 16 smart e-gates at Sharjah International Airport’s departure and arrival terminals over the last nine months, enabling travellers to clear passport control within 20 seconds, said Sharjah’s Department of e-Government (DeG) on July 30.

The new smart gates aim to cut the time required to complete passport control by more than 70 per cent compared to conventional methods.

“DeG is dedicated to supporting the digital shift by government institutions and public sector entities in Sharjah and to playing a major role in establishing a sophisticated digital infrastructure in the emirate,” added Shaikh Khalid Bin Ahmad Bin Sultan Al Qasimi, director-general of the DeG, in a statement.