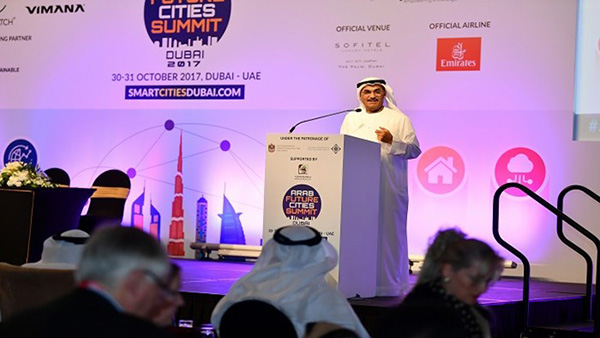 The Summit, organised by the Ministry of Infrastructure Development and the Sheikh Zayed Housing Programme in partnership with Expotrade Middle East, will be held over two days at the Sofitel Palm Jumeirah Hotel in Dubai, with the participation of pioneers and decision-makers in future cities, locally regionally and internationally.

The Future Cities Summit, which will host more than 600 participants and 40 international experts, will present more than 20 specialised presentations in the same field, providing a unique opportunity for the future cities and housing sector, enhancing employment opportunities and learning the best global practices in the field by meeting Decision makers in the sector and from leading Countries in that field.

Dr. Abdullah Belhaif Al Nuaimi said that The UAE recognises the importance of building and developing future cities relying on innovative and creative ideas in line with its development over the past years and its reputation on the global map in the coming years. We are committed not only to keeping pace with the latest developments but also to foresight challenges, develop and analyse visions concerning all vital sectors and design long-term plans that will achieve a qualitative leap at all levels. This can only be achieved through the development of cities and infrastructure to cope with the latest current developments.

He added stated building future cities with state-of-the-art facilities and buildings and renewable energy solutions will contribute to the development and sustainability of the future communities and as a result will lead to an economic growth based on strong foundation that takes into consideration all dimensions of the community, most importantly making the citizens happy.

He noted that The hosting of the Arab Future Cities Summit 2017 in the UAE reflects its ambitious vision to promote the development of future cities that are capable of keeping pace with the rapid changes in the world. The Summit will offer a unique chance for the parties interested in the sector of the future cities and residences, promote employment opportunities and give insight on the best international practices in the field by meeting with worldwide pioneer leaders and decision makers in this sector.

Dr. Abdullah Belhaif Al Nuaimi  said “The Summit is a platform for various parties involved in building cities and developing infrastructure, persons of creative and innovative ideas who contribute to shaping future cities from technological, environmental, economic and other fields. This confirms the importance of the Summit and reflects the reputation of the UAE as the world’s window to the future, by attracting specialists and prominent figures in various fields and developing visions and solutions that would achieve all-encompassing development.”

On the first day of the Arab Future Cities Summit 2017, the speakers discussed the development of smart cities, open city data as well as serial data, related to transport, e-government technology, digital transformation and the role of the future in achieving happiness and enhancing the integration system all in Supporting the cities of the future, which the various countries seek to work in accordance with an integrated system based on studies and the use of technology.

The Minister of Infrastructure Development, Dr Abdullah Balheif Al Nuaimi, Chairman of the Sheikh Zayed Housing Program, said that since its establishment in 1999, the Sheikh Zayed Housing Program has issued 57,000 housing support decisions worth 30 billion dirhams, while the number of homes completed by the program has reached 30,000 and The number of construction phase is 27 thousand homes distributed across the emirates.

He revealed that the number of future complexes under study and planning is 4 complexes comprising 1800 houses, pointing out that the cost of residential neighborhoods under implementation and other future neighborhoods will reach about 7 billion dirhams.