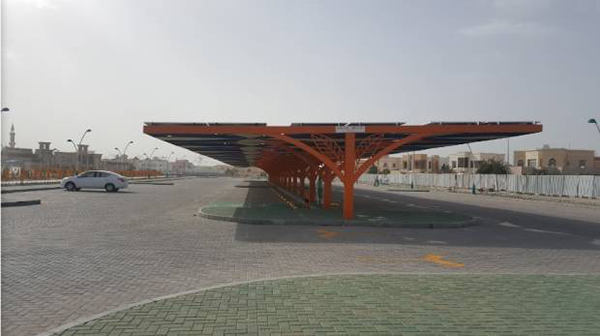 The first smart park with electric car charging stations and parking lots that can harness solar energy has come up in Dubai's Al Barsha South.

Dubai Municipality’s General Projects Department has completed the construction of Al Barsha South Park, which is considered to be the first smart park in Dubai that has applied modern sustainable technologies, the civic body said in a press release.

Marwan Al Mohammad, director of General Projects Department, said the project has been completed at a cost of Dh15 million and is spread over an area of seven hectares.

Fatima Al Muhairi, head of Horticulture and Landscaping Projects, told Gulf News it is the first neighbourhood park in Dubai with electric car charging stations in the parking lot.

“Dubai Municipality has a plan to provide electric car charging stations in all the upcoming neighbourhood parks with parking lots. This is the first one to implement it.”

The entry is free to neighbourhood parks in Dubai’s residential areas.

Al Muhairi said the smart park has 150 shaded parking spaces installed with solar panels, which have an electricity production capacity of more than 260 MW/hour per year.

The official confirmed that, for the first time in the Dubai, the solar power facility that is connected to the Dubai Electricity and Water Authority (Dewa) network has been provided with a robotic self-cleaning system, which increases the efficiency of power generation.

“The energy generated from these panels is used in the operation of the lighting systems in the park, the irrigation system and electrical loads in the service buildings in the park,” she stated.

Al Muhairi said the main energy distribution panel has been set up underground.

“We have implemented the green building regulations under the Al Sa’fat evaluation system of the municipality in this park.”

The project was constructed as part of the strategy of Dubai Municipality to provide the residential areas of the city with parks to keep up with the urban expansion in the emirate, said Al Mohammad.

“The park was designed taking into consideration all the standards of sustainability and quality that are the basis of the design of parks, and the category of the People of Determination in terms of choosing the appropriate games and ease of movement as well as the safety factor,” he said.

The main entrance of the park includes a service building, which has toilets for men, women and People of Determination.

The areas that are linked by pedestrian paths of various types have shaded wooden seating and sign boards. Visitors and fitness enthusiasts can use the 800-metre jogging track around the park, which is also equipped with a variety of fitness equipment, Al Mohammad said.

A bicycle track, two children’s games areas and a fenced family area are among the other facilities provided in the park.