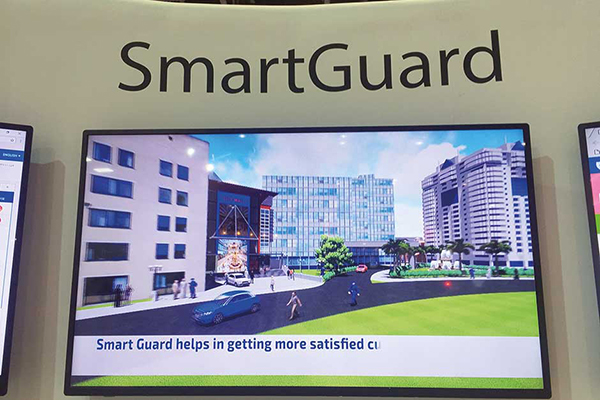 Security guards will always be needed for hands-on, live monitoring of homes and businesses.

But rapid advances in technology will make simple devices such as closed circuit television cameras just as effective in some cases as trained humans, say Dubai Police.

New AI software will ensure that thousands of CCTV cameras will be linked in one command room to fight criminal behaviour in three sectors; tourism, traffic and bricks-and-mortar facilities.

The AI software is so smart in some cases, it will identify any assailant already known to the police as a crime is being committed, police said.

The network, said police, is being phased in via different stages to meet the Dubai 2021 Vision requirements of a smart city. “Dubai is changing, and we must be prepared for the changes. The project was launched to tackle crime and reduce traffic accidents. Government and private sectors will participate in securing the emirate,” Maj Gen Al Mansouri said.

How it will work

Digital brains: Oyoon (Eyes), with an open budget, aims to link all security cameras in the city in one place and the use of Artificial Intelligence will give surveillance cameras digital brains to match their eyes, letting them analyse live video with no human help required. According to Maj Gen Al Mansouri, this is good news for public safety, as it helps police and first responders more easily to spot crimes and accidents and also has a range of scientific and industrial applications. “Many sites in Dubai operate surveillance cameras and we aim to link all in one place for data analysis and to respond to emergency situations. Oyoon will link all government and private sectors surveillance cameras under one umbrella,” Maj Gen Al Mansouri said.

“We are making a study on the existing cameras in Dubai and their types to see what we can do with them. We plan to use AI in the cameras. So we can issue a traffic fine to an offender without requiring an officer to stop him,” Brig Al Jallaf said.

One mugshot is all it takes: Police will have the ability to digitally tail criminals around the city just by uploading a mugshot onto a database. Dubai Police said they can use the audio system in the cameras to warn thieves before they commit a crime that they have been spotted.

“Imagine there is a burglar about to break into a jewellery shop — we can use the audio in the system to warn him that we are watching him.”

Artificial Intelligence for video surveillance utilises computer software programmes that analyse the images from video surveillance cameras in order to recognise humans, vehicles or objects. It changes the images or videos into data to help the decision maker or the official to respond in a quick way to crimes or any suspicious situations.

AI sends an alert if it detects a trespasser breaking the “rule” which says that no person is allowed in that area.

Villa residents: install the app. Dubai Police want security companies to participate more in the security sector especially after launching a new initiative for villa residents to secure their homes by installing CCTV cameras and motion sensors in cooperation with du and the Transguard group to install cameras and sensors in villas. In this programme, residents can download the Dubai Police smart app to sign up for the home security service and enter their details, home location and time of travel so that the police can send patrols to check on their homes.

Additionally, residents can also choose the services of either du or Transguard to install cameras to secure their homes. The two companies will be linked to the police command room for speedy response to any alert.  Major General Khalil Ebrahim Al Mansouri, Assistant Commander-in-Chief for Criminal Investigation Affairs at Dubai Police, said this is an important step to create a safer city and to crack down on villa robberies.

“Those who register [for the app] can enjoy peace of mind knowing that they can also have the facility of [surveillance] cameras installed and have their home safe under the supervision of Dubai Police. Thieves will think twice before approaching a house that has been thus secured,” Maj Gen Al Mansouri said.

The way forward is all about smart programmes

A range of new technologies is being deployed in Dubai to enhance security guards’ performance, says Arif Al Janahi, Security Operations and Services Manager at Sira 1 SMART GUARD. This innovation is already greatly boosting security by live monitoring of security guards in an interactive electronic map while they are on duty.

The programme will help communicate with the guards near any incident for quick action in emergencies such as fires, accidents, robbery, lost children and in any other situations.

“It is a device or application to be installed on smart phones. The guard will be monitored and contacted in emergencies within a short time. Such initiatives will enhance the security of the emirate,” Al Janahi said.

The ‘Smart Guard’ programme not only contains a live map but also includes an upto-date electronic repository of all licensed security guards in the city with their pictures, contacts and locations.

The program also serves as kind of a watchdog to ensure that security guards are making their rounds by electronically tagging them on their nightly walking routes, especially in highly secure areas.

“The security guard companies can monitor their guards to make sure they are making the routine checks and not falling asleep on duty. There will be tags in checkpoints on the path of a security guard. The guard needs to scan the tag with his device or phone to show he reached the point. If the guard didn’t pass the tag, then a buzz or vibration will warn him,” he added.

The guards can instantly receive notifications about any incident and can be contacted by concerned authorities for quick response. The guard can also send an SOS alert by clicking on the icon in the application. Al Janahi said the program is up and running at the Global Village for now and will be phased in across the emirate.

2 SECURITY PATH: Another new programme in the works is called ‘Security Path’ to track live vehicles such as armoured trucks carrying cash, and safari vehicles carrying tourists in the desert.

“It will help to identify and respond to any problem such as a safari car trapped in the desert so we can find the location quickly and a concerned authority can send a rescue team,” Al Janahi said.

For armoured trucks, the new ‘Security Path’ programme can — once the vehicle is located on a live e-map — electronically stop the engine or close all doors of money transfer vehicle in case of robberies or any emergency situation.

“Even in robberies, the programme allows us to lock the doors of the premises or stop the engine to prevent the robbery or hold back the culprits until police arrive. That will help to crack down on robberies of money transfer vehicles,” he said.

3 VIDEO GUARD: This new programme is now being implemented by SIRA to ensure that all security cameras in residential buildings are working.

If a security camera gets knocked out, ‘Video Guard’ will notify a central monitoring alert system immediately.

“The new system will monitor about 250,000 security cameras in Dubai for any problems and inform the maintenance company to fix the problem. This programme will ensure that all cameras are operating,” Al Janahi said.

By ensuring all CCTVs are working properly, it will help security guards on scene do their jobs more effectively and ultimately ensure safety of the residents.