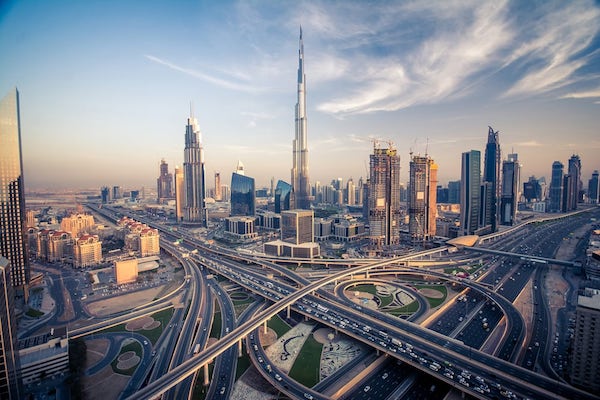 The UAE and its beating heart, Dubai, want to lead the technological charge in the world and serve as a model, and they have a plan.

From 1853 to 1971, the Trucial States was the name given to the seven states that make up the modern United Arab Emirates.

After seven decades of being a part of the British Empire as a protectorate, six of the seven states gained their independence and the UAE was born.

Before the 1971 union, the seven emirates, including Abu Dhabi and Dubai, were mere sheikhdoms with tribal organization scattered along a coast bordering a parching desert.

From the moment it was formed, the young federation started facing significant challenges in the Gulf region and, if you zoom out a bit, the Middle East — a center of persistent geopolitical tensions.

In the following years, oil-rich emirates saw strong economic growth that’s been experiencing a substantial boost since the 1990s, though they have yet to fully recover from the global financial crisis of 2008.

After succeeding in building a politically stable and an economically prosperous country over the past couple of decades, which is no easy feat, the UAE is now making visionary plans for the future.

The UAE’s “Area 2071”
The UAE has achieved so much in the first half-century of its existence. For the next 50 years, it has an even a bigger vision that’s already moving forward.

This vision for the future is encapsulated in “Area 2071”; which is both a strategy and a physical place.

On May 15, Sheikh Mohamed bin Rachid Al Maktoum, UAE’s Vice President and Prime Minister and the Ruler of Dubai, inaugurated “Area 2071” which he described as a “bridge to the future”.

Sheikh Mohammed said Area 2071 is an:

“interactive platform that gathers creative minds, and reflects partnership public and private sector, and innovators to develop creative solutions, implement ideas to serve humanity and design a better future for next generations. Area 2071 reflects the UAE’s ambition to be a key player in building the future. It is an open laboratory to learn, develop ideas and experiences, and design the future, as well as drafting a better future for humanity.”

Located in Emirates Towers, Dubai’s famous landmarks, Area 2071 is designed as a futuristic garden where scientists, investors, artists and the visiting public from the UAE and the world can find an environment conducive to innovation and co-creation.

The “2071” isn’t a number chosen at random: it is the year that will mark the country’s centennial.

Centennial 2071 Plan: 5 Decades, 4 Pillars
The inauguration of Area 2071 is the official launch of plans towards celebrating the UAE Centennial in 2071.

Every channel of the Centennial Plan will pour into a stream that aims to take the UAE to its planned destiny as “the world’s leading nation” by 2071.

To achieve this lofty goal, the UAE’s five-decade plan is based on four major pillars: economy, government development, education, and community cohesion.

These four aspects make up the bold outline of the UAE Centennial project. Area 2071 is all about hammering out the minutiae of the plan.

The basic idea is for “future generations to live a happier life in a better environment, with bigger opportunities and stronger communication with the world,”  tweeted Sheikh Mohammad.

“[The focus will be］on advanced technology and engineering, and instilling an Emirati moral values system in future generations,” he added.

For the plan, the UAE government will rely on a heavy use of AI across all sectors.

Dubai is already making big leaps toward achieving its centennial goals, with projects such as “Smart Dubai”, drone taxis, and the happiness-based City of You.

The UAE has come a long way since 1971, and the perspectives for 2071 look more promising.

Although it would not have established its planned Martian colony by that year, it’d have made big achievements down here on Earth.