LG: How the Middle East Is Leading the Way for Future Urbanism 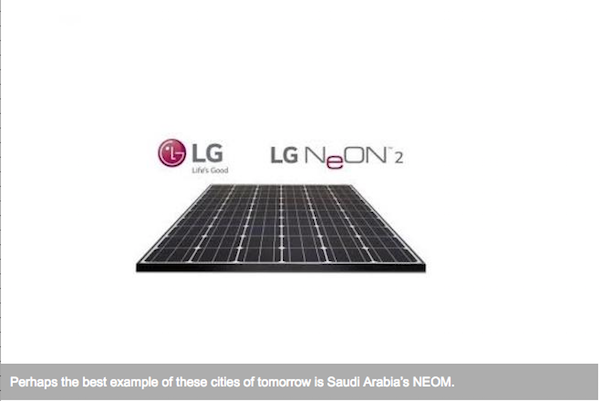 Among the most charming features of the MENA region are its ancient cities, with their narrow streets, labyrinth souks, and vibrant spirit. Built to reflect the needs and lifestyles of another era, these cities tended to grow up organically, beginning with some central point – often a market or public gathering place – and cascading out as the population expanded. Part of the reason these towns have maintained such authenticity is that they’re relatively difficult to adapt to the modern world: the streets are too narrow for most vehicles, the buildings are unequipped for 21st century technologies, and the overall layouts bear little practicality in our modern lives.


But while the Middle East is host to some of the oldest and most storied cities in the world, it is also quickly becoming home to some of the most modern and futuristic. And it’s not just the Gulf leading the charge for modern, sustainable, future-oriented metropolises: countries across the Levant and North Africa are also embracing a more deliberate, planned, and technologically advanced vision for the cities of tomorrow.

Why should we start from scratch?

On its surface, the idea of building a new city from the ground up may seem perplexing: why not just expand or upgrade the cities we have? But as the global population skyrockets, these existing cities are struggling to cope with the rapid growth. Perhaps more importantly, our current capitals and business centers are not sustainably built, and assume reliance on technologies that actively contribute to global climate change: they lack infrastructure for efficient public transport, they are intricately integrated with electrical grids, and they lack the versatility to affordably adopt new technologies. And because of the organic way our cities have sprung up, they are often lacking in sufficient public space – a crucial feature of happy, healthy urban living. By creating new urban centers, we can ease the burden on our existing ones.

Perhaps the best example of these cities of tomorrow is Saudi Arabia’s NEOM, which is already generating massive global interest. This ambitious USD500 billion project is carefully designed to ensure its sustainability well into the next century – and beyond. Every aspect of the city – from its sprawling solar energy fields to its meticulously planned economy – is designed to ensure its future sustainability and livability. Technology will play a central role in NEOM, presenting opportunities for forward-thinking businesses, organizations, and innovators to dream bigger than ever before. Companies like LG Electronics – which is already heavily invested in developing energy-efficient products, such as its award-winning NeON2 solar panels – will find a space to implement advanced technologies on an unrivalled scale: think solar roads, robot-powered public services, and smart home technologies – all seamlessly integrated into every facet of the city. Imagine a city in which every home, office, restaurant, and shop is equipped with LG’s smart home technology, allowing residents to intuitively control all aspects of their environment from the minute they move in. “At LG Electronics, we seek to push the boundaries of modern living,” explains the company’s Levant Managing Director, Hong Ju Jeon. “We have always been a trailblazer when it comes to envisioning – and realizing – a more advanced, sustainable future, and the global emphasis on planned cities and planned communities will further expand the possibilities for our products and solutions, allowing us to create and innovate on a much larger scale.”

At NEOM, even the traditional boundaries of states are being challenged: as a multinational metropolis, Saudi Arabia, Egypt, and Jordan will all work side by side to craft this dynamic urban utopia.

While NEOM may be the most high-profile example of futuristic planned community living in the MENA region, it is far from the only one: in Jordan, the government is already working to develop a new city project to the east of Amman, which will help ease the enormous burden that a rapidly expanding population has placed on the country’s capital. Like NEOM, this new administrative and business center will incorporate energy efficient technologies, modern infrastructure, and a design that is more conducive to happy, healthy urban living. It was be built carefully and deliberately over the next several decades, ensuring that the design and features of the new metropolis reflect the modern lifestyles and livelihoods of its residents.

And it’s this focus on livability that is really at the core of all these planned cities. More than anything, the cities of tomorrow must allow humanity to both survive and thrive in an unknown future: they must be intelligent, intuitive, and adaptable to whatever new challenges or opportunities arise.