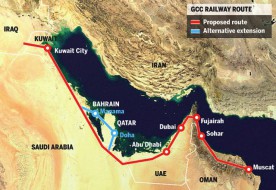 Abdullah Al Shibli, Assistant Secretary-General for Economic Affairs at the GCC General Secretariat, said the length of the track is likely to be 2,117km. He explained that it would start from Kuwait, pass through the other GCC countries and end in Oman. He said the decision for the project has been taken because of its positive impact on GCC trade and freedom of movement of citizens and expats. It would also encourage mutual investment among the member countries.

Al Shibli said the project, approved at the 30th GCC summit in 2009, has begun with the preparation of an engineering design and the establishment of the Gulf Railway Authority to supervise and execute it in the shortest possible time as per the best global standards. He noted that the GCC Railway Network will provide jobs in transportation and support services to GCC nationals, helping reduce unemployment, develop human resources and encourage growth of industries.

The train will begin from Kuwait and Saudi Arabia via Dammam and move to Bahrain, Al Shibli said, adding Qatar and Bahrain would be linked through the Salwa Post, and from Saudi Arabia it would go to the UAE and Abu Dhabi, Al Ain, ending in Muscat via Sohar.

The speed of passenger trains would be about 220kmph, he said, while freighter trains would run at a speed of 80-120kmph. Al Shibli said, “The project will be executed as per the best global specifications and designs available, such as axial loads, signalling and communications, operations and maintenance systems.” The project is expected to be completed by 2018. The UAE has finished its network and is working on linking other parts with GCC countries.

Authorities are holding regular meetings for the financial and technical committees and sharing experiences in railway projects. They update the tracks and the linking points between the countries and the places on the design have been identified.

The GCC states are working on unifying rules and regulation regarding goods and passengers. Feasibility studies for the project that links Saudi Arabia to Bahrain end this year. The study for establishing joint authority for the railway to coordinate between the member countries and ensure implementation and operation of the project in integrated manner is also expected to end this year.