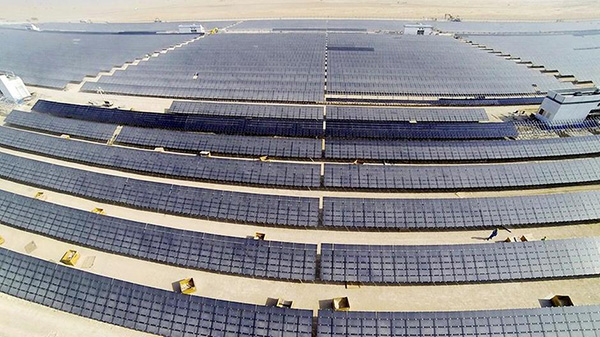 The Dubai Electricity and Water Authority (DEWA) said on Friday it has become the first Arabian Gulf utility to adopt the International Renewable Energy Certificates system, which allows for trade in these certificates and encourages the increase in the size of renewables in the energy mix.

The Dubai Carbon Centre of Excellence or Dubai Carbon issued the certificates to Dewa’s 13 megawatt first phase of the Mohammed bin Rashid Al Maktoum Solar Park, which will produce 5,000MW by 2030, with total investments up to Dh50 billion.

The certificates are equivalent to 25,000 megawatt hours of annual net electricity supplied to the grid from the 13MW solar power plant.

“Dewa has consistently supported Dubai’s efforts to raise awareness on various environmental issues by adopting and launching several relevant initiatives and projects,” said Saeed Al Tayer, chief executive of Dewa. “Our aim is to increase awareness on the importance of conserving and preserving our natural resources. Carbon reduction and impact mitigation form part of our environmental strategy.”

The UAE as a whole has taken several steps to boost the share of renewable power in its energy mix.

For example, the UAE Energy Plan 2050 aims to cut carbon dioxide emissions by 70 per cent, increase clean energy use by 50 per cent and improve energy efficiency by 40 per cent by the middle of the century, resulting in savings worth Dh700bn.

The policy’s targets for the source of energy for local consumption by 2050 have been set at 44 per cent from renewable energy, 38 per cent from gas, 12 per cent from clean fossil and 6 per cent from nuclear energy. At the moment, more than 90 per cent of UAE’s energy needs are met by natural gas.